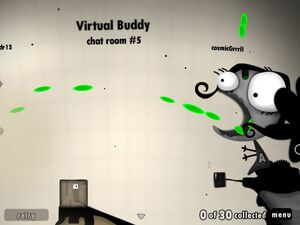 cosmicGrrrl!, known better by the nickname Alice, is a virtual character appearing in World of Goo. Alice only appears in her debut level, Alice and Bob and the Third Party. Alice is evidently in a monitored conversation with Bob, in the Virtual Buddy chat room #5. The Bright Green Goo flying out of her mouth and into Bob's ear and back most likely symbolizes the flow of data between them. Appropriately, the word "laconic" in Bob's username can refer to a person of very few words.

Alice (and Bob) are names used in cryptography to represent the two people talking to each other, with Alice the person talking and Bob the one receiving. That fits quite well with Alice sending green goo (the infomation) to Bob. The third person in the level description is also known as Eve (for eavesdropper).