Beauty Goo is a species of Goo found in World of Goo. They are first introduced in Beauty School and have the ability to be broken down into 18 smaller goos that are used for collection in their own special red pipe.

Beauty Goo are used solely for being broken down into Small Beauty Goo and collected in the red pipe. For example, in The Red Carpet, a Beauty Goo is sent flying up into some gears, broken down, and then collected. But in Genetic Sorting Machine, three Ugly Goo must be ground up to fill a dangerous, spiked pit that the Beauty Goo cannot cross. Beauty Goos cannot be used to build structures nor picked up by mouse. 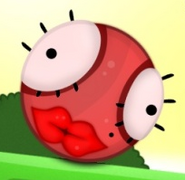