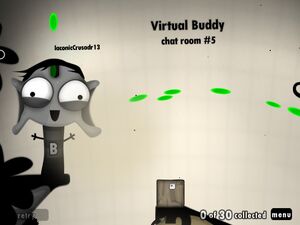 LaconicCrusadr13, known better by the nickname Bob, is a character in World of Goo. Bob debuts in Alice and Bob and the Third Party, which also features Alice. After this level, Bob nor Alice are never seen again. But during the level, they are in the Virtual Buddy chat room #5, a monitored conversation. Bob has very large ears, large enough to fit a Block Goo in them. His ears also function as a means of catching the level's Bright Green Goo and transporting them back to Alice. Oddly enough, if the player places a block goo into the ear, it will explode, as if it had touched a blade. Perhaps this is to keep the player from using this as a strategy to block the green goos from passing instead of using the intended strategy. Bob also seems to be shooting the balls back out of his head, and into Alice's, which is likely a visualization of them talking, and blocking the Goo shows a third party listening in.