Not to be confused with the character, The Burning Man.

Burning Man is a level in the video game World of Goo. It is the first level of Chapter 3. In this level, two new Goos are introduced: the Red Goo along with the Bomb. Above these is a heavy block that resembles MOM known as the Burning Man. It is unknown if this is a Goo, but the game describes it as: "that guy". On top of it, there is a small Red Goo structure carrying Dark Black Goo. The player must set the structure to fire so the block could move out of pipe's way. Its eyes then burst due to Bombs.

When using Goo throwing method, only one Red Goo is actually required to set the structure on fire. The rest of the Red Goos can be squeezed between "The Burning Man" and a wall where they are pushed through the tiny gap. After that procedure is done, a single remaining Red Goo with just one carefully aimed shot can bounce back onto the structure after touching a fire. 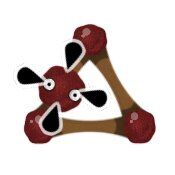 As stated, the fire rebound method is quite effective here. If you really want to build to the fire, though, start by putting your first Red Goo against the ceiling, near the structure. This should cause wall clinging and give the structure some extra support.

Nothing different. Rebound or wall cling and build. Also, at the beginning, you can throw one of the Balloons at the structure with Dark Black Goo to make it move right and closer to the pipe for when the structure burns.