Ivy Towers is a level in the video game World of Goo. It is the fifth level of Chapter 1. In this level, the player is introduced to Green Goo for the first time. The player must use the Green Goo's ability to detach from its own structure to climb up a tall shaft, at the top of which lies the exit pipe. 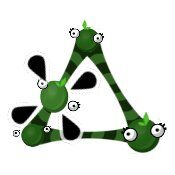 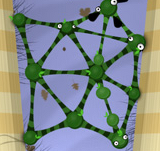 It may seem to be unreliable at first, but in fact a good strategy to use is to build up as far as possible, then build as far up as you can against the left wall, and the same with the right wall. Repeat until you make it to the pipe. They will appear to "drift" away from the wall after you place them, but in fact this works in getting up to the pipe.

One of the easier OCDs. After using the above strategy to get to the pipe, use the pipe hanging technique to get a line hanging from the pipe. Then just continue to place all of the Goo Balls on that line. At the end, detach the Ball at the bottom of the line to get the top one in.