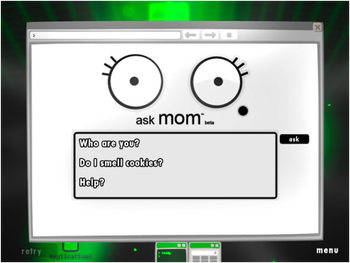 MOM is a character in the video game World of Goo. She first appears far off in the background of the level Ode to the Bridge Builder. If you click on her, she will introduce herself as MOM. As the game continues, MOM is occasionally seen, always in the background of a level. In the penultimate level of Chapter 4, MOM's Computer, the player finally meets MOM, who this time appears as a large, white computer window. Through a warm-hearted (somewhat disturbing) conversation with MOM, she reveals herself to be a spambot, whose function is to send everyone who used to visit the Information Superhighway ads and other unwanted e-mails.

MOM's appearance is that of a box with eyes. When far off in the background (as in some levels), her appearance is similar to a boombox with speakers.

However, these may be her spam bots, as she cannot be in multiple levels at once.

Once this has been achieved, World of Goo Corporation receives the mail and, unable to deal with so much spam, promptly explodes, returning the world to 2D.

Below are the messages received from MOM during various levels of the first four chapters, prior to the conversation with her in MOM's Computer. Her messages are mostly motherly statements such as "be good", "be careful", or "MOM knows best".

Conversation from Ode to the Bridge Builder, Chapter 1

Conversation from Beauty and the Electric Tentacle, Chapter 2

Conversation from The Server Farm, Chapter 4