MOM's Computer is a level in the video game World of Goo. It is the ninth level of Chapter 4. There are icons on the desktop screen labelled "Games", which causes rectangular Block Goos to appear, and "Applications", which create square-shaped Block Goos. Also on the desktop is a window that has Small Green Goos inside it. A player must build a tower tall enough out of the desktop to reach the icon of MOM to have a conversation with her about spam. 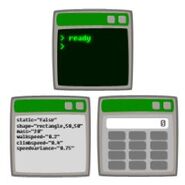 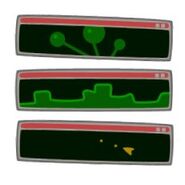 It all depends on your stability skill. Sometimes, just build up with a stack of Applications, or 2 stacks of them side by side, or even 3 if you want to be really careful. If you're close to the icon but your tower seems to be tipping, drop a Block right near the icon and click it.

WARNING: The WiiWare version of this game has a bug in which completing the level once will cause the OCD to become unobtainable if you hadn't gotten it. Heed this advice to avoid this. It's possible using a single stack of Applications, but I recommend using vertical Games just in case (it may be easier than it sounds). Also, no, you do not need to click on Applications or Games and then click again to pick up the box. That will count as 2 moves. Just click and drag straight from either of them.