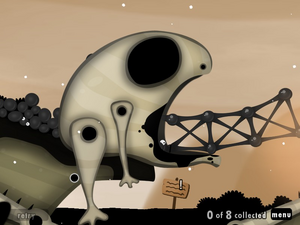 Misty is a frog appearing in World of Goo. She only appears in her debut level, Misty's Long Bony Road. After this level, Misty is never seen again. According to the Sign Painter, Fisty thought he saw her, waved and hoped one day they could be friends. If you look closely at the background, you can see him, pretty much confirming this claim. The Skull Goo that is within the level is replacing the Balloon Goo that was used in the level Fisty's Bog, so the Goo might have been a counterpart of Misty, since she is a skeleton as well.