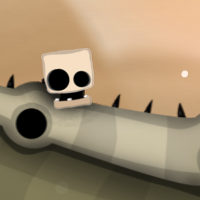 Spikes are hazards present in many levels in World of Goo. Most of the Goo Balls and objects coming to the contact with spikes will pop or explode, however there are exceptions to it. Skull Goo can withstand spikes and build onto them like normal ground (provided they are coming out of the ground). Small Ugly Goo can touch spikes without popping, but their counterpart Small Beauty Goo cannot.

Spikes are often spaced out, allowing a carefully placed vulnerable Goo to be placed between them and remain intact. Spikes first appear in Fisty's Bog, where they come up from the murky water in addition to hanging down from the ceiling. Spikes are usually black or gray in color.

Spikes don't seem like the deadly thing sometimes; occasionally the ground beneath the spikes is what pops the Goo. An example of this is Misty's Long Bony Road, where it is quite visible that the Goo passes through the spikes until it hits the ground.

Spikes are a general obstacle in many games, so it is only natural for them to play a prominent role in World of Goo.

The only thing more deadly than hitting spikes is falling off-screen, something that kills even Skull Goo.

Sticky Bombs are not destroyed by spikes, as seen in You Have To Explode The Head, where the Sticky Bomb can obviously stick to the robot's spiky head without popping.