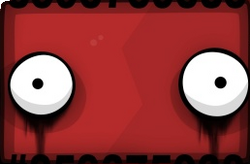 The Burning Man is a red, rectangular concrete block with two circular eyes appearing in World of Goo. He is only seen in the level Burning Man, where he must be destroyed to clear the path to a pipe. According to the Sign Painter, his location is "the result of poor local management."

This character was one of the first ever revealed by 2D Boy, appearing in numerous trailers for the game, though his exact role was not revealed. Strangely, the Burning Man resembles the head of MOM when she is seen in the background of levels.