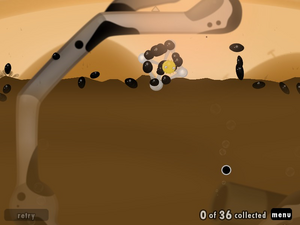 Water is a stage object in the video game World of Goo. It appears in many levels, usually for a purpose.

Because goo is evidently less dense than water, structures and Goos themselves will float in water. Some levels start out in water, where the player has to twist and turn to build upwards, and other levels will finish in water.

Water comes in many colors. In many levels, such as Drool, water is black. In the level Water Lock water is a light brown. These changes are apparently purely cosmetic, and the variants are all the same type of water. In Genetic Sorting Machine, there is a different colored water present: orange. This orange water is different from other types of water in that Goos do not have buoyancy in it, that is, they sink. It is also unusual in that it appears to be floating on top of black, normal water. This orange liquid may not be water, but more like oil, as in reality, cooking oil is lighter than water.

A notable variation, in Grape Vine Virus there exists a different kind of water called infected water that is neon red and turns Launch Goo into Infected Goo.

Most Goos will simply float at the surface, and so will their structures. However, the Eyeball Goo variation of a Balloon Goo is able to be attached to structures underwater and pull them down. However, because they only appear in one level, there is little extra testing that can be done towards this.