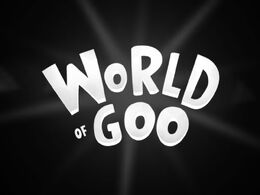 This article is about the game. For the location the game takes place in, see World of Goo (planet).

World of Goo is a video game for the Wii, Microsoft Windows, Mac OS X, iOS, Nintendo Switch, and Linux by 2D Boy, an independent game developer founded by Kyle Gabler and Ron Carmel, both former Electronic Arts employees. It was nominated for the Seumas McNally grand prize, Design Innovation Award, and Technical Excellence at the Independent Games Festival. It was released for the Wii's WiiWare in North America on October 13, 2008. On November 11 2008, 2D Boy announced that World of Goo will be released as WiiWare in Europe, instead of a retail release.

The game is built around the idea of creating large structures using balls of Goo. The game is divided into five chapters, each containing several levels. Each level has its own graphical and musical theme, giving it unique atmosphere. There is also a bonus meta-game called World of Goo Corporation, whose objective is to build the highest tower using Goo Balls which the player collected through the course of the game. Players from all over the world can compete, as the height of the tower and number of Goo Balls used are being constantly uploaded to the 2D Boy server.

The story is told primarily through the cutscenes and signs encountered throughout the game, which were left by a mysterious figure known as the Sign Painter.

Initially, pipes appear throughout the land, waking up many sleeping Goo Balls who have gone undisturbed until this, as they are filled with a childlike sense of curiosity and naivety they build themselves towards the pipes. Upon reaching the pipe entrance, the Goo Balls are sucked by the pipe system into the "World of Goo Corporation" main building where they are processed into many products, most prominently energy drinks. The excess Goo Balls are left outside the Corporation headquarters where they together begin to build a massive tower. At the end of the first chapter, some Goo Balls escape from a Corporation building by attaching themselves to Eyeball Goo which have the ability to float. The chapter ends with the Goo Balls "seeing far away new lands."

In the second chapter, more pipes appear in an impossibly windy desert where a giant power plant is located. However, during the past, the location and appearance of the plant was hidden, and its energy output slowed down. A new Goo Ball is introduced, which is ground up by the Corporation into a facial cream. Near the end of the chapter, the power plant, which looks like a giant woman, is discovered. It turns out that the power plant "ran on beauty" which is (according to the game) a highly reactive metal like lithium or francium. After some of the Small Beauty Goo are injected into it, it becomes operational again, allowing the Corporation to open up a new factory in the south.

During the third chapter it is said that the Corporation develops a mysterious "Product Z". It eventually turns out that the mysterious Product Z is actually the third dimension (a reference to z-axis in mathematics). This causes much commotion amongst the general population who cannot see where anything is now. World of Goo Corporation tells them to contact tech support in the Information Superhighway after mankind, all animal and plant life becomes rendered "incompatible with the world".

In the fourth chapter the Goo Balls set out to find the mysterious "MOM" program amongst a vector-style environment. Shortly after the beginning the Goo Balls find the object responsible for rendering the graphics. After pumping many of their own kind into the object, the graphics render improves, creating a more realistic environment (and the Square Goos). Near the end they encounter the MOM program who, during a somewhat disturbing conversation with, turns out to be a spam bot. The Goo Balls try to overload Product Z by sending every message in the history of spam to World of Goo Corporation. After venturing to the Recycle Bin and un-deleting everything with an Undelete Pill, the Corporation headquarters explodes, shutting down Product Z while creating a massive layer of smog, dust, smoke and debris that envelops the entire planet.

In the Epilogue, the remaining "scientifically pure" Goo Balls are sucked away to the shattered pieces of the Corporation's headquarters. The remaining Goo Balls decide to work their way up the island to reach a site where a telescope is located. The final level of the game reveals that the Goo Balls are now completely extinct, all the remaining having been sucked away to the shattered fragments of World of Goo Corporation and added to the tower, and the gigantic telescope at the site has been rendered useless as it cannot see past the layer of smog. The Sign Painter reveals in his final sign that he has now become the Telescope Operator. Some balloon-like Fish in the sea attach to the telescope and lift it out of the ground, where it breaks through the layer of smog and sees the tower of Goo that has been built at the former World of Goo Corporation Headquarters, which can also see past the smog. The telescope falls back to earth before it could see what the Goo Balls were building towards. However, a final and last cutscene reveals their goal; the camera pans up into space to reveal that the Goo Balls that escaped at the end of Chapter 1 have managed to reach a far-off planet populated entirely by Goo Balls.

An additional chapter was initially planned for the European retail version of the game, located on the Moon; however such plans have been abandoned because 2D Boy did not increase the price of the game for some, to make available the new chapter at the same time for all. It may be released later.

The basic colors of the game, such as in Tower of Goo

Chapter 3 takes a dark industrial turn, like in Upper Shaft

The story reaches its peak in the level MOM's Computer

The Epilogue features some difficult levels like Weather Vane

The main objective of the game is to get a requisite number of Goo Balls to the pipe representing the exit. In order to do so, the player must use their various abilities to build bridges, towers and other structures to overcome gravity and various terrain difficulties such as chasms, hills, spikes or cliffs. Extra Goos recovered in the pipe are pumped through to the World of Goo Corporation, a sandbox area where the objective is to build a tower taller than those of other players of the game, whose towers are represented by respectively named clouds floating at altitudes corresponding to their height.

Levels and chapters in the game are interspersed with cut scenes, and the game also features "Obsessive Completion Distinction (OCD) Flags" - awards unlocked for having completed levels under more stringent criteria.

There are many types of Goo Balls in the game and each of them have unique abilities. The player needs to exploit their combinations in order to complete each of the levels.

The WiiWare version includes multiplayer with up to four people on the same Wii.

The overall World of Goo is split up into five chapters, each containing a number of levels. The chapters are set over the course of a year in the World of Goo.

The other selectable chapter from the main menu is the World of Goo Corporation. Goo Balls collected above and beyond the required amount to pass a level are piped out of each of the played levels to here. Starting from just a single triangle of Goo, the aim is to build the highest possible tower. The Goos in the World of Goo Corporation are unique that they can be repositioned like Green Goos, however, they are black, and can only form two connections at a time like Black Goos.

In the World of Goo Corporation, towers built by other players of the game are represented by clouds bearing the player's name, nationality and height of the tower, including details on the total number of Balls collected by the player and how many were used in constructing their tower. The clouds float at the same height as the top of a player's tower. An online leaderboard charts the heights of the top 50 towers, as well as the top 10 players for each level of the game.

There are a total of 48 levels in the game, World of Goo Corporation inclusive.

The Chapter 3 map screen, "Cog in the Machine"

The Epilogue map screen, "End of the World"

The game is based on the prototype game Tower of Goo[2][3] developed for Kyle Gabler's rapid game prototyping Experimental Gameplay Project.

The World of Goo Soundtrack was created by Kyle Gabler, who also designed, wrote and illustrated the game. It was released as a free download on 20 January 2009.

World of Goo received mostly positive reviews. Metacritic gave the game three different scores for the three different consoles, each indicating "universal acclaim" with Metascores ranging from 90/100 for the PC to 98/100 for the iOS. Eurogamer called World of Goo "Physics' latest, purest, and most brilliant gift." IGN said of the Wii version, "World of Goo is an amazing WiiWare game that you simply must buy for this is exactly the type of software that needs both recognition and support", finding only minor fault with the camera controls and lack of a level editor. WiiWare World gave the game 10/10, saying "Not only is World of Goo easily the best WiiWare release to date, it's also proof that you don't need a large development team or millions of dollars to create an outstanding video game." Nintendo World Report criticized the "slow start" of the game, but otherwise praised it as "easily the best WiiWare game to date and, perhaps, one of the best this generation."